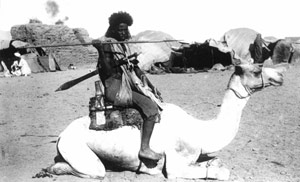 Old Ethiopic (native name, Ge'ez, etymology uncertain, but possibly related to the root g'z, "free") is the oldest attested member of the South Semitic language family. The earliest inscriptions date to the reign of the Aksumite king Ezana in the 4th century A.D., at the time of the first great Ethiopic kingdom and the christianization of Africa. The writing, a modified form of the consonantal Sabaean alphabet, was most likely imported through the African trade colonies of ancient Yemen; an early trilingual inscription of Ezana is written in the Ethiopic, Greek, and (Pseudo-)Sabaic languages. Though chiefly Semitic in structure and syntax, Ge'ez also contains Greek and Cushitic substrata, owing the former to biblical and ecclesiastical loanwords and the latter, including many terms for native flora, fauna, and technology, to continued contact with the Cushitic and Nilotic languages.

The history of Ge'ez can be divided into three major language periods. The first is the relatively early period of Aksumite inscriptions, some 42 or so in number. Although Abyssinian (nat. Habashat) peoples had already wandered into the region of modern Ethiopia in the first centuries before our era, founding the kingdom of Aksum in the 1st century A.D., the written record begins with the adoption and modification of the alphabet of the old south Arab peninsula in the 4th century. The most important of these form a core of some 12 inscriptions, dated to the reign of Ezana, and reflect the early experiments with written Ethiopic; at least half of these are written in the unmodified South Arabian alphabet, only four in the modified, vocalized Ethiopic script. During this time, too, the term Aethiopian was first used by the Abyssinians to refer to their land, kingdom, and church, preferring ,Aithiops' (found in Herodotus, Book III and in the New Testament, Acts 8.27, though most likely originally referring to the Meroitic peoples) to the Semitic ,Abyssinia'

The second period runs from the fifth century until roughly 1000 A.D., and provides the last records of spoken Ethiopic. Though no manuscripts are dated before 1200, several transmit texts significantly older in date, all ecclesiastical in nature, and most translations of Greek originals. This relatively small corpus of literature nevertheless provides the classical syntax and style of later writings.

After the political collapse of Byzantium and the spread of Islam, Ethiopia became politically and religiously isolated, even from the Coptic church which had provided the first Ethiopian missionaries. When this contact with Egypt was re-established, Ge'ez was again employed to revive the traditional literature, though it had since died as a spoken language. New translations of Christian texts were made from Greek, Coptic, Syriac, and Arabic originals. For the first time we also have larger secular writings, including numerous chronicles and the Ethiopian national epic, the Kebra Negast ("Glory of Kings"), recounting the legend of Solomon and Sheba. Popular religious and magical texts and amulets during this time begin a tradition that continued well into the 20th century.

By the 16th century, Amharic had become the dominant popular language, and Ge'ez became the official language only of the church, kingdom, and literary tradition. Scribes and clerics were trained in monasteries in Ge'ez to preserve this written tradition, but the pronunciation was systematized based on that of Amharic, the dominant Ethiopian language (if such a thing is possible in a land with 130 different languages from 4 different language groups) from the 16th century until today; written Ge'ez contains at least 4 consonants which are not differentiated in pronunciation. Study of the language by western Europeans, due largely to German and Italian colonial interests in the region, began seriously in the 19th century. The most important works to date:

* Felasha : Beta Israel -- en.wikipedia.org/wiki/Beta_Israel [ Falashas ]
- 85,000 living in Israel
- Most immigrated in the last 20 years
- Felasha: one in transition/in exile
- Mostly from the Gondar region in Ethiopia, some in Tigrai

1984 - Under tight military censorship, Israel brings 15,000 Ethiopians to the Jewish state in a secret airlift through Sudan known as Operation Moses.